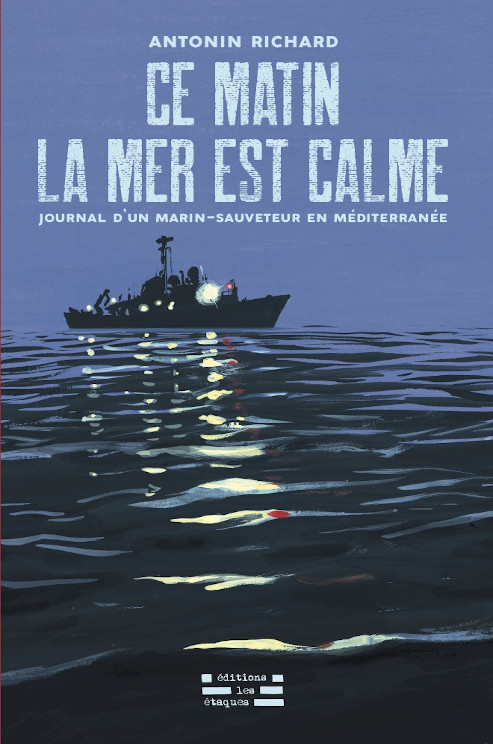 this morning the sea is calm

diary of a sea-rescuer in the mediterranean

The sea is a mirror that is only troubled by our bow. The sky is clouded but the light is strong. The atmosphere has something of a metallic grey. We are going for our last rescue before heading back to the north. I am feeling tense, my head filled with all the « what if… » that i can imagine after the days we have lived. We put the small rafts in the water. When we approach, the tension is palpable , the people ask us if we are the police. We quickly say to them « We are here to help you ». Our « guests » are full of life, and without knowing it, they reignite our motivation. Some members of the crew say that we are not saving them, but that it is them who are saving us.

Through the story of his rescuing experiences in the mediterranean sea, Antonin Richard takes us on a trip where the demagogy of european politics merge with the police of dictatorial regimes. Also where those who support marine friendship are on a daily basis taming the sea – and on the move to let the right to the people who migrate to give themselves a present and a future.
author(s)

With a B.T.S. (Brevet de Technicien Superieur) in the audiovisual sector and a bachelor degree in journalism Antonin Richard was not seeking to become a sea-rescuer. It is through the making of documentary movies that his political conscience an his need to act have been stimulated. He collaborates with the cooperative « Les Mutins de Pangée », participates to the re-publishing of Afrique 50 from René Vautier ‒ first anticolonial french movie ‒, the editing of Une histoire populaire des États-Unis from Olivier Azam and Daniel Mermet, and to the shooting of Merci Patron ! de François Ruffin.
Antonin subscribes to the « cinéma d’intervention sociale » thought by René Vautier, which implies to « act on the developement of reality, until it is transformed ». In this state of mind and with the collective of women of the roma community from Hellemmes-Ronchin, he shoots the documentary Nos poumons c’est du béton which condemns their life conditions on a vacant lot of the metropolis of Lille.
In 2016, Antonin let go of his camera and goes to Lesbos with Greenpeace's activists to take part in the life-rescueing activities organized at sea. He joins the rescue team of Médecins sans frontières, then boards as a sea-rescuer on several ships of N.G.O such as (Sea-Watch, MSF, SOS Méditerranée) offshore of the Libyan coast. He participates in the technical preparation of the Ocean Viking in 2019 and, more recently, to the one of the Louise Michel in 2020.
In the medias